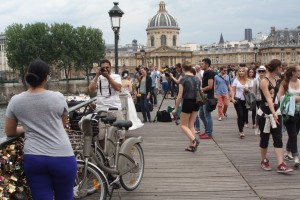 French Academy of Science in the background

On Monday we spent some more time exploring Paris.  There were some thunderstorms throughout the day, so we spent much of the time indoors.  I did find the French Acadmy of Sciences (in the background of this picture), where Antoine Lavosier did his ground-breaking work at quantifying chemistry, and attacking the phlogiston theory.  This site is an international chemical landmark.  More details are at http://www.acs.org/content/acs/en/education/whatischemistry/landmarks/lavoisier.html

Tuesday morning we left Paris for Chateau-Chinon, a small town in central France where’s Karen’s LeFevre family lived for 133 years in the 18th and 19th century.  The family was persecuted for their religious beliefs, and they were all martyred except for the 16 year old son who escaped with the family Bible baked into a loaf of bread.  We didn’t find anything in the town referring to LeFevre, but it was interesting to visit the town, nonetheless.

Finding reliable internet access has been a problem…there may be several days when I don’t post, but then I’ll put several up in short succession.  Make sure to read all of the posts by clicking on the  previous posts list on the right.  If some of you could leave some comments as well, that would be great so I can tell how many people are reading these.  The comments are moderated, so I have to approve them before they show up…there has been a lot of spam comments coming in by an automated “bot” because they are all the same.