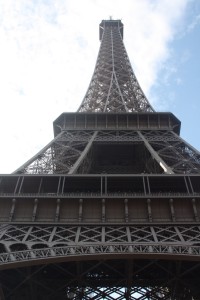 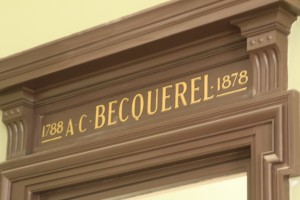 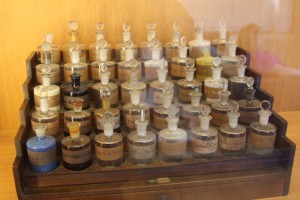 First some tour-isty things…the Eiffel Tower!  When I learned I had received this grant back in February, I tried booking advance tickets to the Tower, as I had heard the lines are horrendous.  Unfortunately all the tickets were taken up through September.  As it turns out, they only sell a small fraction online, forcing the rest of us to stand in line for two hours.  Arriving half an hour early we found the line was already long, but we tougher it out and made it to the top.

Some chicken pizza and delicious  chocolate ice cream at a street-side cafe overlooking the River Seine made for a good lunch.   The stop on the science trek was the Musee de Arts et Metiers.  Again, lots of old scientific equipment on display.  The highlight was Antoine Lavosier’s laboratory, which had been reconstructed.  Lavosier was responsible for  quantitative aspects of chemistry, giving us stoichiometry, among others.

The next stop was  Paris’ version of the Museum of Science and Industry.  A modern building, I was hoping that there might be commemorations or exhibitions on early scientists.  It became fairly apparent that the intended audience was school-kids and the general public  yearning for knowledge about simple science principles of science.  We cut our losses and moved on.

The Louvre wasn’t originally on the list, but with some spare time and hope that the lines would be short an hour before closing, we got in and saw what we could in 40 minutes.  We did manage to find the Mona Lisa!

A short stroll down Rue de Rivoli brought us to the church tower at Saint Jaques de la Boucherie.  Blaise Pascal read a mercury barometer at the bottom, then took it up to the top of the tower and re-read it, demonstrating the change in barometric pressure due to elevation changes.

A bit more strolling around the St. Michael area brought us to the Notre Dame cathedral, where a Pentecost mass was in progress, but we could go in and look around nonetheless.

One more day in Paris!