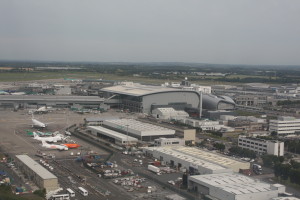 Wednesday was an early morning, as our flight out of Amsterdam left at 9:25am.  A one-hour flight to Dublin put us there at 10:30, and the fight to Chicago left at 11:30.  Normally, an hour of connecting time would be sufficient, but at Dublin, passengers bound for the United States clear U.S. customs in Dublin before even leaving.  Before we could even get to U.S. Customs Pre-Clearance, we had to have our bags X-rayed by Irish Immigration, even though we were in a secure area of the airport.  There was an inevitable delay, but we quickly went to U.S. Customs Pre-Clearance.  The first order of business…have our carry-on bags X-rayed again!  This was the third our bags have been checked.

Then it was into the long lines for a passport agent.  By this time it was 11:00, and our flight was already boarding.  Fortunately, the lines moved fast.  I was curious how they would handle our checked bags…in the old days, with a domestic connection prior to going to the U.S., one would have to claim their checked bags and potentially have them inspected.  With pre-clearance, I wasn’t sure how it would happen, since our bags were checked through all the way to Chicago.  When we got to the passport agent, he asked about the food we were bringing back (no problems), then click on his mouse and a picture of our bags popped up on his monitor.  He asked if these were ours, we said, “yes”, and he said were were all set and to have a good trip.  That was easy!  D- for for repeated X-raying of our bags, C- for the long lines to the passport check, but they moved fast, A+ for the one-minute stop with the passport agent and U.S. government technology that worked perfectly.

We arrived at the Are Lingus gate during the final boarding call at 11:20, but were surprised to find there were still at least 50 people waiting to board.  It was clear we wouldn’t be leaving on time.  We ended up leaving 20 minutes late.  The flight was long (8 hours, 15 minutes), but we were glad to see 3 of our 4 kids (Logan had to work), my father, and Dori (who watched the kids while we were gone) waiting for us in Terminal 5 at O’Hare airport in Chicago.  When we return home, we will leave the next morning for a wedding in Kansas, so we won’t have much time to cool our wheels.

In the next few days, I will post an Epilogue, which will include a few highlights and some statistics of our travels.  Thanks for following!