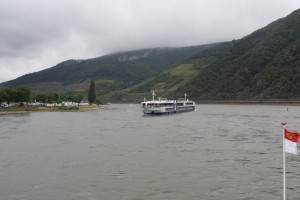 Cruise on the Rhine River 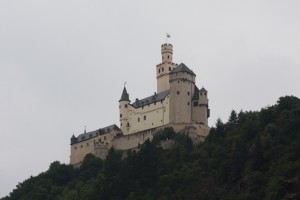 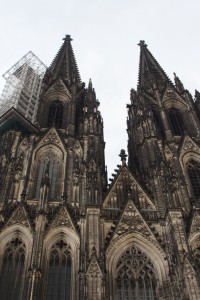 Our hosts dropped us off at the Mainz train station, and a short train ride later we hopped on the Köln-Düsseldorfer boat and took a three hour cruise downstream on the Rhine River.  Nearly a dozen castles overlook the river valley, and normally this would be a very pleasnt and relaxing cruise.  Temperatures in the low 50s, a brisk wind, and a nearly constant drizzle made it a bit miserable.

We disembarked in Braubach and took the train the rest of the way to Köln (Cologne), where we looked around the Kölner Dom (cathedral), that boasts twin spires towering 500 feet over the sidewalk below.

We had to pick up our rental car at 4pm, so we didn’t have much more time to explore. It was then a two hour drive on the Autobahn system to Mengerenhausen for our night’s stay.  More on that in the next post.