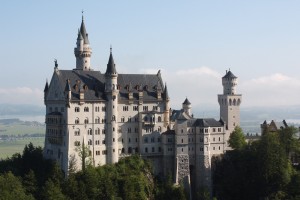 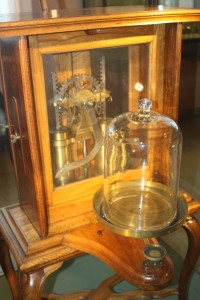 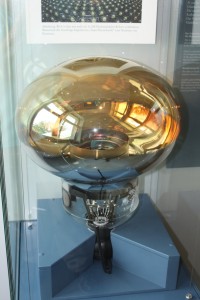 A very large photomultiplier tube from an astrophysics experiment 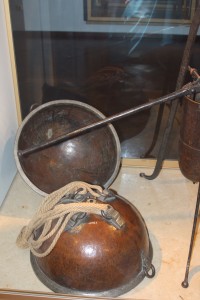 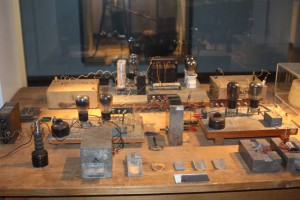 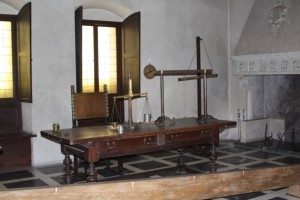 Wednesday night we stayed at Ruchti’s Hotel and Restaurant in Füessen, Germany, which is only about a five minute bus ride from Neuschwanstein Castle. We had advanced tickets for the 9:20am tour, which meant that we had to be at the ticket center by 8:20. It was about a 20 minute walk to the train station where we stowed our bags, then the short bus ride to Hohenschwangau. From there, one can hike steeply uphill for 40 minutes, pay for a horse-drawn carriage ride up, or take the bus to the overlook for €2.40, and then the last 10 minutes on foot. We took the bus up, and then a leisurely carriage ride down. The view from the overlook was spectacular.
Schloss Neuschwanstein was built by Bavarian King Ludwig II starting in 1868 but was never fully completed due to the king’s mysterious death in 1886. The castle served as the inspiration for Walt Disney in designing the Magic Kingdom castle at the Disneyworld resort and theme park. Unfortunately, taking pictures and videos is not allowed inside the castle, but we took lots on the outside.
Instead of spending two nights just outside of Strasbourg, France, we booked a last-minute hotel room in Munich just across from the train station. Once we took the train back to Munich, we checked in at the hotel. The plan now is to explore Munich in the evening, go to Dachau Friday morning, and then go on to Strasbourg Friday afternoon.
With some extra time now, I set out for the Deutches Museum, which was originally on then itinerary. I’m glad I went. This is one of the largest science and technology museums in the world, and rivals any I have been to. They have many different areas, and one could spend several days there. For comparison, Chicago’s Museum of Science and Industry has a lot of interactive displays, and the primary audience is families and schoolchildren. They don’t have many artifacts on display.
The Deutches Museum has all of that…some basic, fundamental and interactive displays on basic science concepts, but in many cases, they are reinforced with historical accounts and many, many, original artifacts. The Deutches Museum has a large number of artifacts that demonstrate the discoveries and inventions of many scientists. This will definitely be someplace I must return to in the future! As I said before, I could have spent a whole day there…I only had two hours, though! I got through most of the museum, and was delighted to see they had one wing devoted entirely to amateur radio (I’m a ham radio operator).
With the museum closing at 5pm, Karen and I headed out to explore the Marienplatz area of Munich, with the Rathaus and the famous Glockenspiel. We worked our way towards Höfbrauhaus, a restaurant (and beer house). While I’m told it is not “authentic,” it’s styled and operated like one. What better place to be during a World Cup soccer match between the United States and Germany, than in a German beer house! On big screen TVs, everyone was watching. As we went out and wandered the streets, in every store, there was a TV or iPhone tuned to the World Cup. This was the case in every city and country we have been in since the start of the Cup. It is a big deal here in Europe.
Friday the plan is to go to Dachau, and then to Strasbourg. We have less than a week left in Europe…I think we are ready to come home, but it has been an amazing trip! 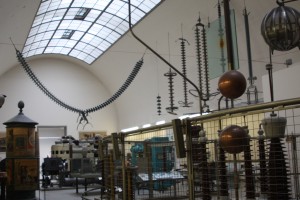