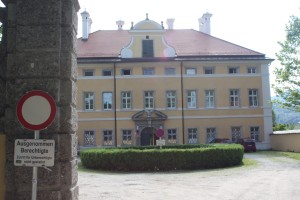 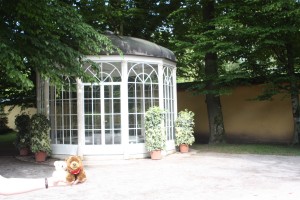 Gazebo from The Sound of Music 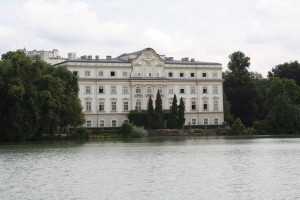 The sun was already shining brightly when we got up at 7:15 to be ready for a breakfast of bread, rolls, ham, and cheese; a traditional Austrian/Swiss breakfast. The three sites we wanted to visit were closer to our home stay than the train station, so we left our bags at the apartment and would stop by after we were done around noon to pick them up. The goal was to be on the train by 1:00, which would get us to Dachau several hours before it closed at 5:00.
We set out down a beautiful walking/biking path called the Hellbrunn Alle. Along the way, we came to Schloss (castle) Frohnburg. You will recall this from the Sound of Music movie as the villa that Maria arrives at for the first time, and peering through the gate, her jaw drops. This is also where the family pushes the car out of the driveway at night, only to be discovered by the Nazis.
Continuing down the Alle another kilometer or so, we arrived at Schloss Hellbrunn, and the magnificent gardens around them. Here is the gazebo famous for the “Sixteen going on Seventeen” scene, though it was relocated from its original location since they couldn’t handle the influx of tourists. The Schloss also his known for its trick water fountains. We debated if we had time to go on the tour, but it was only 30 minutes long so we went. It was pretty neat and a lot of fun, but our schedule was beginning to unravel again.
Our last stop on the Sound of Music tour was Schloss Leopoldskron, which is on a lake and is where many of the terrace scenes were shot (the family drinking pink lemonade, Max and the Baroness talking), as well as the children boating and falling in the lake. Very pretty here, and we came across a tour group where somebody was playing, “…high on the the hill was a lonely goat…” from the movie soundtrack.
Our bus connections were slowing us down…10 minutes here, 20 minutes there, but we got back to our host’s apartment shortly after noon, only to discover she was gone and our luggage was locked in her apartment!
After half an hour, she showed up, having taken her adult son out for lunch at McDonalds. The afternoon itinerary to Dachau now appeared to be in jeopardy, and that was confirmed when we finally made it to the train station and found that the next train would not get us to Dachau before 4:30, which is not enough time. So we went to Füssen, south of Munich, for our Wednesday night lodging to try and regroup and see if we might be able to squeeze in Dachau before heading off to Strasbourg, France, since we have some built-in makeup/down time there before our last push north towards Amsterdam.