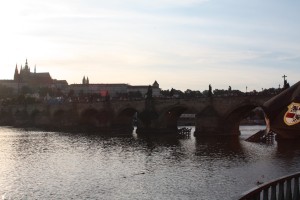 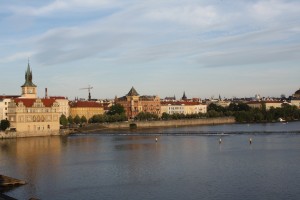 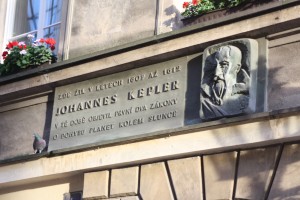 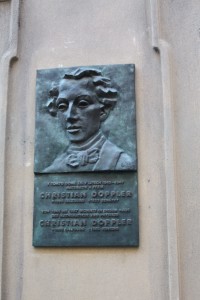 The overnight trip from Belgrade, Serbia to Prague, Czech Republic was in a sleeper car on a Serbian Railways train. If you have ever been in a sleeper car on Amtrak, you may not consider it luxury. However, in comparison to a 1950’s Soviet-era, it was. The floors and walls showed many years of age, the sink in the corner dripped, and there were no toilet facilities in our compartment. Karen likened our train to a “circus train” similar to what you might see hauling around then Barnum & Bailey Circus. I never did find the elephants. But then again, Serbia only emerged from behind the Iron Curtain twenty-five or so years ago, and then endured dictatorship, followed by a decade of civil war.
Just about the time I dozed off around 1:30 am came the first “pasaport chek!” Back up in the loft, and just starting to nod off again, another “pasaport chek!” We arrived in Budapest at 6:00 am, and had a two-hour layover in the VIP lounge…benefits of a 1st class Eurail pass (probably wouldn’t have gone for 1st class due to $, but all Eurail Global passes are only 1st class, and we needed the Global).
Upon arriving in Budapest, we have been through eight countries. How many passport stamps do you think we picked up? Less than you would think. Most of the European Union is a member of the Schengen Treaty, which opened borders and eliminated passport checks and stamps. The United Kingdom is not E.U., nor is it a Schengen state. Switzerland is not E.U., but it is Schengen. Serbia is neither E.U. Nor Schengen.
So we got a stamp in Dublin from the U.K. pre-clearing us to enter England. Stamp two was in London from French customs pre-clearing us to enter the Schengen Area. Stamp three was an exit visa from the Schengen Area in the Rome airport on our way to Serbia. Stamp four was arriving in Serbia. The first “pasaport chek” didn’t yield any stamps…Serbia was just checking to see if we had arrived legally before we left. Stamp four was from Hungarian officials on the train, once again entering the Schengen Area, as Hungary is both E.U. and Schengen. We will probably get two more on our way home…far less stamps than countries we visited.
We checked into the hostel and set out around supper time. Our targets were the homes of Christian Doppler, famous for the Doppler Effect and the Doppler shift, and Johannesburg Kepler, who is known for his observations of stars and planets, and the laws named after him which describe orbital motion. After finding the homes and shooting some video and still pictures, we explored old-town Prague, including Charles Bridge. Prague is a charming city, and it was refreshingly clean, with a sense of culture and sophistication, mixed in with historical eastern-European charm. My paternal grandmother was born to Bohemian immigrants, so that would mean I’m one-fourth Bohemian. Perhaps my Slaby ancestors passed through these streets in Prague at some point.
Tuesday we leave Prague bright and early on the train for Salzburg, requiring several connections. Hopefully we arrive in Salzburg in time to do the Sound of Music tour, though not actually with a tour group…just on our own. Between Prague and Karlsruhe, Germany, there are no historical sites on our itinerary, so we will be more like tourists for the next several days.