Planning a month-long trip through Europe, sleeping in 20 different locations, and using public transportation for 99% of our travels was a tremendous undertaking. And so far, knock-on-wood, as we still have 11 days to go, it has been relatively uneventful with no surprises, missed connections, or lost reservations.

One leg in our travels is from Belgrade, Serbia to Prague, Czech Republic. Time didn’t permit stopping in other cities in-between. The cheap airlines didn’t have any good connections or fares, so I opted for an overnight train. Gets us there and saves having to get a place to sleep. Tickets had to be booked over the phone in advance (done, in March). I used a very reputable agency with lots of positive reviews. Agency says they will deliver to our hostel by time we get there.

Guess what…no tickets. Agency is closed for the day, and the next day is Sunday…will they be open? See the concern? Plan was to head to the agency and see if they were open and might have our tickets.  Otherwise, we would have to buy another set for the sleeper car ($$)…that is, providing there were any available.  We had originally planned to be in Belgrade yesterday instead of today, but unavailable sleeper coaches caused a domino-effect of changes to reservations before and after Serbia.  No sleeper, and we might be stranded in Serbia!

Just as I was getting ready to trek out to the agency, the owner of the agency shows up at our hostel with the tickets, apologizing profusely for likely causing any stress (um, yeah!).   Crisis averted!

The Nikola Tesla Museum is just around the corner from our hostel.  I went right at opening time.  It is very small, and I was through it in 20 minutes.  I waited around for the tour and demonstration. The displays were interesting.  They have many replicas of Tesla’s equipment on display, as well some of his original equipment, and his ashes are interred in a spherical urn.

There was a 20 minute video in English, followed by some demonstrations of AC induction motors, hydroelectric power generation and transmission, and of course, a large 10-foot Tesla coil.    Guests were invited to hold fluorescent tubes while the high-frequency electric field from the coil made them glow.  I’ve done this demonstration for my classes using a smaller coil, but seeing it with such a big coil was impressive, even though I’ve done it several dozen times myself.

Tesla had built a coil apparently large enough to light up tubes several miles away and had dreams of providing wireless lighting to the entire world for free, but that never happened.  Tesla did, however, make lasting contributions through his invention of the AC induction motor, electrical transformers, the adoption of alternating current to transmit electrical power, and the invention of radio transmitters (Marconi gets the credit, but it was really Tesla’s ideas…Tesla even sent Marconi designs for a transmitter, signing them with Marconi’s name).

With nine hours to kill, Karen and I headed out to sight-see in Belgrade.  Stops included St. Mark’s Church, the National Assembly Building, old-town Belgrade, Belgrade Fortress, shopping areas, the CityAssembly, the Presidential Palace, and the St. Sava Temple (Serbian Orthodox).  The pedometer said 6.58 miles, so we cooled our wheels back at the hostel until our train is scheduled to depart for Prague (via Budapest) at 9:45pm. 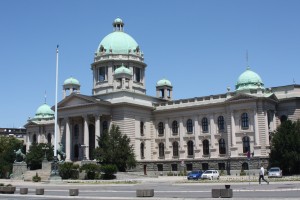 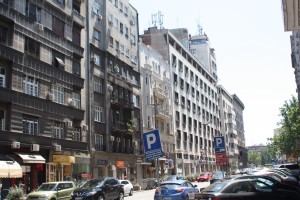 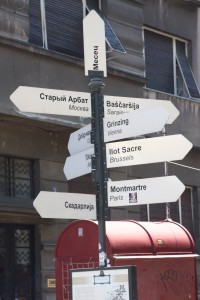 A long ways from Indiana 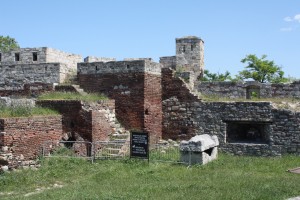 Belgrade Fortress that protected the city in earlier times 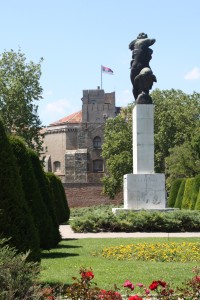 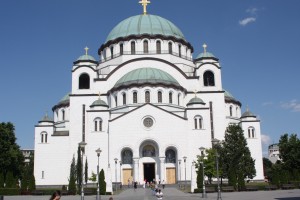