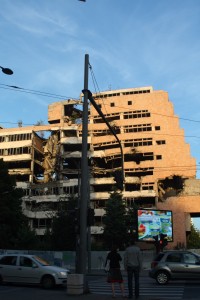 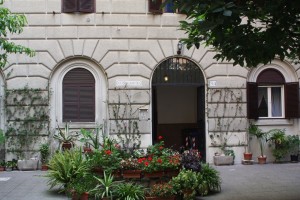 Entrance to our hostel in Rome 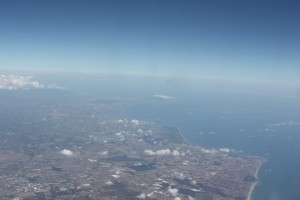 The Italian Amalfi coast, as seen from our flight from Rome to Belgrade

Saturday is mostly a travel day from Rome to Belgrade, Serbia.   Attraction in Serbia is the Nikola Tesla museum.  A 30 minute train ride to the Rome airport on the Leonardo Express shuttle found us at the EasyJet bag drop desk.  We were about #10 in line.  No problem, right?  They only had one agent working, and she was very slow.  Then people ahead of us were being told that they were too early, their flight was not “open” yet, and they would have to wait to check their bags.

Now if you know anything about Italian temper and their fondness of waiting in line, you can probably guess what this turned into.  The line swelled to over 100, people were cutting in line, elbowing each other out of the way, and cursing.  There was still only one agent working (fault EasyJet…the customer service survey will be a delight to fill out!), and she clearly didn’t have a grasp on when luggage could be checked.  She got so exasperated at one point, she just got up and walked away for a few minutes.

Finally, a horde of agents poured in, took their stations, and the gears of low-budget airlines in Europe started to turn.  My observation is that they brought some of the problems on themselves.  All of the pre-trip emails and reminders say get to the airport early, really early!  So we all did, and they couldn’t handle us.

Uneventful hour-long flight to Belgrade.  From the air, the Soviet-bloc era high-rise apartments are easy to see.  It also becomes apparent on landing that one is behind the former Iron Curtain.  Signs are written in Cryllic and Latin words that resemble nothing like English.  Heading into the city, the old architecture was impressive; the buildings from the Warsaw Pact era are rather depressing.  Our hostel is about six blocks up the street from Slavijic Square.  We checked in and relaxed for a while before heading out to find some supper and the travel agency that supposedly has tomorrow’s train tickets (read the June 22 post).

Along the way, we came across the former Yugoslav Defense Ministry Building that was bombed by NATO forces back in 1999 during the Serbian War.  The building was never torn down, and remains today.  Rumor is it is being torn down to make room for a Trump property.  Tomorrow is the Nikola Tesla Museum, and some sightseeing around Belgrade until our train leaves.